Crystals Used In Modern Technology – What You Didn’t Know

Crystals are a vital component in our modern society, but many of us are not aware of just how prevalent they are in modern-day technology. Even though it may sound like something straight out of a science fiction novel, the use of crystals in our everyday lives has very real benefits. If you remove the metaphysical beliefs about healing stones and other crystal information, you’ll still find that crystals have innumerable scientific usages that impact our day-to-day routines.

Today, crystals are incredibly valued for their technological properties. In an era where we spend more time than ever relying on technology, we are completely surrounded by crystals, in both ornamental designs and building even materials.

If you’ve ever used gas burners, had tests run with medical technology, or used any kind of personal gadget, chances are you were operating crystals without even realizing it.

The marriage between crystals and technology was discovered in 1880 when an experiment was conducted with tin foil, magnets, and a jeweler’s saw. Mineral synthesis and synthetic crystals were grown in a laboratory, with the latter proving to be more abrasive than their natural counterpart. This primitive study paved the way for countless inventions over the next century.

The scientists concluded that crystal properties can be harnessed through the piezoelectric effect — an ability of certain crystals to produce voltage when put under mechanical distress. This demonstration enables the crystals to receive, process, and transfer energy.

When an electrical charge is applied to the crystal, it has the capability of turning that energy into mechanical. Received and processed energy can be converted to power; sonar, ultrasound, computer chips, and amplifiers all incorporate the piezoelectric effect. In particular, The minuscule electric charge can also spark; ovens, heaters, and lighters make use of the piezoelectric crystal in their respective appliances.

In other words, hitting crystals creates energy, and that energy powers our gadgetry.

Top Five Ways Crystals Are Being Used In Modern Technology

Most screens now have liquid crystal displays. Chances are, you’re reading this through one right now. Liquid crystals are sandwiched between two sheets of glass. When voltage is applied, the energy moves the molecules, the plates are polarized, and light transmission can be controlled. This type of display is found in typical user-friendly handheld devices: computers, watches, and clocks with melting numbers all incorporate LCD. The liquid crystals are also found in diagnostic tools, kevlar, and oil-recovery technologies. The same materials darken windows and spectacles to shield people’s eyes from the sun.

Recent advancements in health and wellness are experimenting with liquid crystals. Capsules with the technology are tasked with releasing antibodies in the body. Additionally, clothing has been manufactured that absorbs hazardous chemicals detected in the air.

The first-ever technological application of piezoelectric material was used in ultrasonic submarine detection during World War I.

In 1917, a French inventor came up with an ultrasonic obtrusion and submarine detector that utilized quartz crystal. The device projected high-pitched sound frequencies capable of passing through the water and bouncing off objects, returning to the source.

Outside of the military implementing the technology as a vital source of their operation, the highly sensitive equipment is also incorporated into oceanography research, including mapping the seafloor.

Since the cavemen’s days, fire has been a crucial part of our existence and was the turning point to our technological evolution as human beings. Although crystal materials are used in a plethora of industries (including automotive, information technology, manufacturing, and medical), one of the most important was passed down from our Homo Erectus days.

Crystals are a vital part of our high-voltage power source. All grills, stoves, and burners are equipped with a spring-loaded hammer that hits a piezoelectric crystal, producing a current that ignites the gas. Electric cigarette lighters and transformers work in the same way. 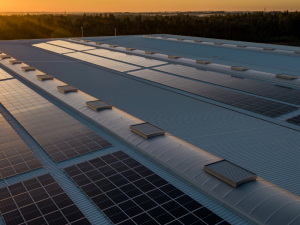 The basic composition of solar cells are created by elements of pure silicon — an electrical component for decades. Solar cells use photovoltaics, converting light into electricity using the semiconducting silicon for generation and as photosensors. However, silicon is now being viewed as old news.

A recent innovation has led to a renaissance of new solar panels made from manufactured crystals called perovskites. These crystals are made from bromine or iodine and can be painted across any surface. When the liquid dries, crystals form as semiconductors. As of 2020, there are over two million solar panels installed across the United States.

The watch industry also uses crystals, not just for the aesthetic appeal, but to monitor time. An electronic oscillator regulated by a tiny piece of quartz crystal creates a signal at a precise frequency standard, maintaining an exact control time. The precision-cut silicon-based crystals serve as the heart of all clock sources. The battery sends electricity to the quartz via an electronic circuit. Timing signals occur in steps in a feedback loop, sparked by electric energy.

Interested in learning more about technology? CLICK HERE to see how we are using crystals in modern technology for water treatment and restructuring.